During the production of cold-smoked fish, salt is an essential ingredient for creating a top quality end product. Correct, consistent grain size and the purity of the salt itself are of crucial importance. Because ZOUTMAN excels in both of these areas, it was selected as the partner for Marine Harvest smoke-house many years ago. The fact this concerned sea salt was less important in the beginning. However, with the increasing focus on sustainable business, the ecological nature of the sea salt has become an unexpected bonus for Marine Harvest.

The Atlantic salmon is filleted in the country of origin and then transported fresh to Marine Harvest. Upon arrival, the fish is then salted.

The origins of the smoke-house lie in the company La Couronne, which was founded in 1924 by the Boels family in Zandvoorde. In the beginning, the company worked with classic fish varieties such as sprats, mackerel and herring. But from the 1970’s, it began to focus on salmon. The company expanded substantially and took up a new residence in premises covering 4700 m² at the Zandvoorde Industrial Park in 1984. Four years later, the company was taken over by alcohol manufacturer Cointreau, which wanted to diversify its range with the addition of luxury foodstuffs. This activity was halted in 1991 and the smoke-house ended up in the hands of Englishman Albert Fisher. That company was then taken over by Norwegian company Stolt Seafarm which, five years later, merged with the Norwegian company Marine Harvest.

In 2006, this group merged with Fjord Seafood and Panfish to continue under the name Marine Harvest. Karel Coussement, Quality Manager at the smoking company: “As a result of the merger, Pieters Visbedrijf became part of the Marine Harvest group. They had two smoke-houses: Demaro in Brugge and Wisco in Scotland, whose activities were relocated to our site. We thus became part of the biggest smoking company in the country. Today, the focus still lies on smoking salmon; both farmed salmon from Norway, Scotland and Ireland and also wild salmon from Alaska. We also smoke halibut and other fish varieties such as mackerel and trout, which are also filleted and packed."

Today, the smoke-house has 90 FTE and, in busy periods, another 20 people are employed on temporary contracts. In the past year, the company produced 1,500 tons of finished product. 90% of this was intended for the retail sector, food service and fish shops in the Benelux and the rest was exported. Partly as a result of the worldwide presence of the Norwegian parent company, other export markets within and outside the EU are currently being investigated.

The Atlantic salmon is filleted in the country of origin and then transported fresh to Marine Harvest. Upon arrival, the fish is then salted. Karel Coussement: “This is carried out automatically using a dosing machine which distributes the salt evenly over the surface of the fillet and takes the thickness of the fish into account." Dry salting gives the product a characteristic texture and flavour. In addition, the technique ensures that water is drawn out of the fish, reducing the water activity and ensuring microbial stability during the shelf-life of the product. There then follows a maturing period of 4 to 24 hours (dependent upon the size and fat content of the fillet) in order to give the salt time to penetrate the salmon.

The salmon is then placed in smoking units for 10 to 18 hours and dried so that it can continue the maturation process. Karel Coussement: “We let the salmon 'rest’ for two to three days in refrigerated units. During the process, the salt is naturally distributed throughout the fish. The trimming process then follows, when the fillet is skinned and, in some cases, the smoked crust and the muscle fat is removed. The fish is then cut; partly manually for fish and specialist stores and sometimes for food service clients, and automatically for the retail sector." The process ends with the product being vacuum packed.

For the Marine Harvest smoke-house, it is vital that the salt is always available. Karel Coussement: “The many process steps and the maturing period mean that it takes four to five days before we can cut and pack the fish. Even though we always have salt in stock, at peak moments we may need to order more. It is vital that it is delivered within 24 hours in order to guarantee the continuity of the production process. ZOUTMAN offers an exceptional service in this area. The deliveries always occur within the agreed time-frames.”

Two birds with one stone

The delivery guarantee was one of the reasons why Marine Harvest got involved with ZOUTMAN in the first place, but it was certainly not the most important. Karel Coussement: “Until 2006, we worked with a local supplier. When we invested in a new salt machine, we found that the grain size that we had been using previously was not suitable for ensuring the machine worked effectively. In close collaboration with ZOUTMAN, we investigated the issue and this eventually led to the right grain size for our production process being identified. In 2006, we were also asked to smoke organic salmon for the Benelux market. In this context, we are not able to use any anti-caking agents. ZOUTMAN had a solution which meant we could kill two birds with one stone: they could supply salt without anti-caking agents with a grain size that was suitable for the salt machine; this meant that we didn't have to work with two different types of salt."

Bert Lamote from ZOUTMAN: “Sea salt offers a natural range of grain sizes. When we process a batch of sea salt, these various grain sizes are sorted into categories and stored separately. This enables us to supply the grain size that is most suitable for the customer’s specific needs. In the case of Marine Harvest, it transpired that salt with a diameter of between 0.8 and 1.2 mm would be best for the salt machine and this also meant that anti-caking agents were not required.”

Sea salt is much more ecologically responsible than classic kitchen salt. Bert Lamote: “Sea salt is extracted naturally by evaporating the pure sea water in salt basins. The combination of sun and wind creates a salt crust that is harvested by machine. Sea salt is also extracted from an inexhaustible and renewable source. Processing only involves washing, drying and sieving; steps that require a lot less energy than the extraction and processing of vacuum salt.” Karel Coussement: “The ecological nature of sea salt was a deciding factor in the argument for choosing ZOUTMAN. Given the fact that more and more customers, consumers and Marine Harvest itself are focusing on sustainable products, the choice of sea salt was an added bonus for us.”

Even though sea salt has a reputation for containing more natural impurities than vacuum salt, Marine Harvest has had no complaints. Bert Lamote from ZOUTMAN: “In our ultra-modern production facility in Roeselare, we have an optical cleaning machine that scans the salt and removes impurities pneumatically. As a result, we can supply salt that, in terms of impurities, is the same as vacuum salt, but with all of the benefits of sea salt.”

Marine Harvest is a very satisfied customer. “ZOUTMAN supplies top quality products, maintains strict supply reliability standards, constantly works on improving processes and is also very flexible”, explains Karel Coussement. “A few years ago, for example, we asked for the salt to be supplied in 25 kg bags instead of 50 kg bags in order to help with ergonomics for our operators. ZOUTMAN had no problem fulfilling this requirement and adapted immediately. Another bonus is that the salt supplier is BRC and IFS certified, which means we don't have to audit them every year to ensure they meet the requirements of our quality system. ZOUTMAN and Marine Harvest have worked together very successfully for some time now; their relationship is definitely worth its salt!” 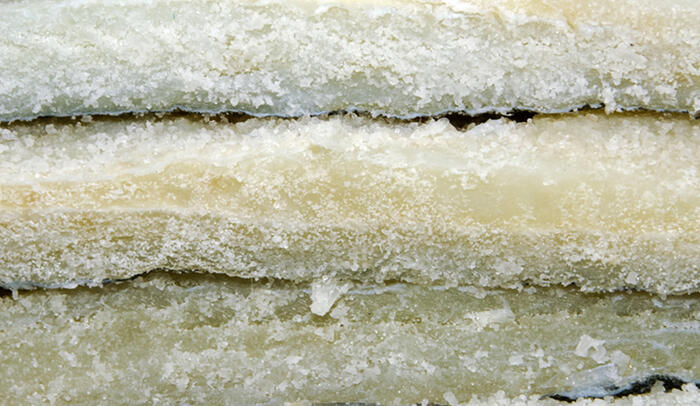 The purest salt for fish processing